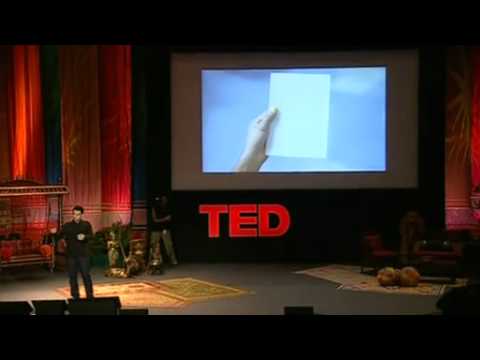 That’s what Pattie Maes and Pranav Mistry of MIT’s Media Lab propose. They want to equip humans with a roving, interactive internet-equipped interface that gives instant, nearly unlimited information about our surroundings while letting us manipulate information like never before. Their invention, called (appropriately) SixthSense, consists of a small wearable camera, a mini-projector, and ... Pranav Mistry is a PhD student in the Fluid Interfaces Group at MIT’s Media Lab. Before his studies at MIT, he worked with Microsoft as a UX researcher; he’s a graduate of IIT. Mistry is passionate about integrating the digital informational experience with our real-world interactions. Some previous projects from Mistry’s work at MIT includes intelligent sticky notes, Quickies, that can ... Pranav earned his Bachelor of Computer Science at Gujarat University, India in 2003. He earned his Master of Design at IDC, IIT Bombay, India in 2005. And is currently earning his Master of Science in Media, Arts, and Sciences (MAS) at the MIT Media Lab, USA. The whizkid talks about integrating the digital world with the real world h+ Media Pranav Mistry Archives - h+ Media. Welcome to Humanity+ Magazine. Welcome to Humanity+ Magazine. Welcome to Humanity+ Magazine. Pranav Mistry “SixthSense” and the Magic of Fluid Interfaces: An Interview with Pattie Maes of MIT Media Lab. October 13, 2009 0 Views 1 Comment. Walking into MIT’s Media Lab is like walking into a digital candy store. On the third floor, you're ...